Bring the features you love from Twitch to your YouTube livestreams!
A missing feature on YouTube streams is user input, and this is how we fixed that. Our YTCR ties directly to your StreamerBot application, so whatever you can imagine you can do, it’s possible now on YouTube. Unlike Twitch, with YTCR you have the ability to give (and take) channel points away from specific users, which gives you even more control behind your channel! The only thing your viewers have to do is download the Chrome Extension

You should now have three new Actions inside your StreamerBot:

Click the Set Channel Rewards action and you should see two Sub-Actions. Double click Set global "youtube_channel_id"
Where it says CHANGEME beside value, update this to your YouTube channel ID. You can get that here if you aren’t aware of it.

The Clipping Tool is a new feature from v0.1.2 that adds a clipping feature to your stream. This utilizes the OBS Replay Buffer feature and would require additional setup. We made this because YouTube’s clipping feature doesn’t actually create a downloadable clip to post on other social media platforms, so we hope this will be a good alternative to Twitch’s clip feature.

If you don’t plan on using Clipping Tool, feel free to move to the next section.

How does it work?

It only allows one clip every minute. It does this by renaming the files by ‘year-month-day_hour-minute’ while also thanking the user who created the clip.

This is a fork of HYP3RSTRIKE’s Advanced OBS Clipper to function with YTCR as a separate icon within the extension. Credits go to him for giving us this idea, so I’d recommend dropping him a sub to say thank you!

Inside StreamerBot, head over to:

Right click and select ‘Add’ and insert the following: 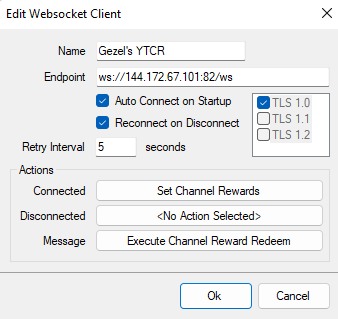 Once you’ve completed this, right-click and choose connect!

Tip: Anytime you add/remove/modify channel rewards while connected to the WebSocket, you must go into Servers/Clients > Websocket Clients and right-click disconnect and then reconnect to pull the changes. It only pulls the reward data on load at this present time.

We’ll go back over actually adding channel rewards once we get you connected on the site, as this completes the websocket connection and confirms you own the Channel ID you entered before.

Tip: You can actually add a custom dock on your OBS to see how many points each user has! If you click View Profile on the YTCR site, you can see your username in the URL bar like this: ytcr.gezel.io/u/USERNAME.
Add the following URL (and update your username) to a custom dock inside OBS > Docks > Custom Browser Docks to see this from there; ` https://ytcr.gezel.io/obs/USERNAME?darkmode=true&refresh=true`

It’s likely you’ve set up channel points with StreamerBot before for your Twitch, but if you haven’t, you can watch IRLCreates video here. This should give you an idea on how to get started. The channel points used will be the ones under the “Twitch category” on StreamerBot.

There are some important things to know what we will pull into the YouTube Channel Points that you should pay attention to:

Any reward that requires a user input will also automatically not be added to the extension, as this is a Twitch feature that currently cannot be replicated with our extension.

The cost of a channel point inside StreamerBot will also be the cost of the action inside YouTube. Users generate points every 5 minutes, so be sure you set these fair with how many points you offer every 5 minutes from the Dashboard.

It’s important you and your viewers install the Chrome extension, as that’s what will bring the buttons to you and your community.

As this is an extension, it’s important to know that this will only work on Chrome or other Chromium based browsers (pretty much anything that’s not Safari or Firefox) and will also not work on the YouTube app, nor in YouTube Studio view at this time.

The best way to ensure your community have the extension is to let them know it can be downloaded from https://gezel.io/download which will redirect them to the Chrome Extensions Store.